Most golfers including myself have one or other time in their lives hit the dreaded ‘shank’. One shank is usually enough to send fear and panic even into the most seasoned golfer and usually if you shank one shot in a round, you are bound to shank another!

One of the main and overlooked reasons I feel many golfers shank the golf ball is due to early extension. Early extension is when your hips move closer to the ball at impact than they were at address.

One of Main reasons for shanking the golf ball 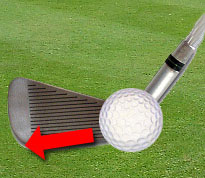 To avoid the shank, give yourself space to swing the club freely.

Push your rear end back as though you’re getting ready to sit down in a chair and hang your arms naturally down. This will give you some room between your arms and body.&.

If your hips and rear end pull in toward the ball during the downswing, your arms and hands will get closer to the ball as well, which often leads to a shank.